One of my favorite actors won in this category this year: Charles Laughton, in his star-making turn as the priapic king, Henry VIII:

I’m not sure there has ever been a moment in history which turned so intently on the male genitalia as Henry’s mixing of marriage and the church — but that is never shown in this movie. Instead, we get a royal, randy romp in the hay.

Typical Howard performance, all hesitation and caution and timidity.

Paul Muni’s heartfelt, sincere turn in the crusading I Am a Fugitive from a Chain Gang has lasted much longer in our collective memory. Muni was never better than he was here:

Those were the three original nominees. But others may find more support from some of you.

Fredric March had a very strong, tortured turn in The Eagle and the Hawk as a WWI flight commander troubled by the men dying under his command.

The Great Profile had one of his best movie parts in Dinner at Eight, an all-star extravaganza better in almost every way than Grand Hotel. John Barrymore plays a tortured wreck of a man, a shell of a man. He’s quite good. 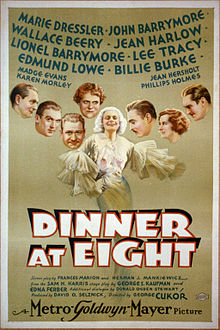 That’s Madge Evans to the left there.

The first is hard to see.

Claude Rains had to convey a superb performance without his face, and often with his body, with a voice alone. The humor James Whale so loved comes out beautifully, with dripping irony.

And finally, a performance that still haunts me, thirty years after seeing it in a revival house. Ladies and Gentlemen, the incarnation of evil, Pater Lorre in Fritz Lang’s chilling masterpiece M. 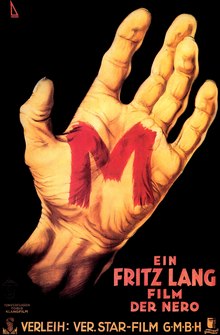 Lorre had other iconic roles — as Joel Cairo in The Maltese Falcon, as Ugarte in Casablanca — but his child-killer in M. will remain as his most chilling moment. He is the face of evil, an evil that requires nothing supernatural to sustain it.

Please take a moment and vote!