In her very first starring role, an elfin, sprightly, fairy princess won the Best Actress Oscar. With Roman Holiday, Audrey Hepburn was immediately a star, which she would remain for the rest of her career.

Her competition included the former good girl nobility of Deborah Kerr, playing the naughty, adulterous lover in From Here to Eternity: 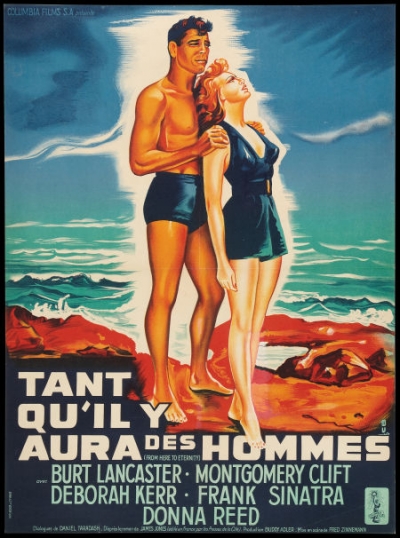 Somehow, Leslie Caron got a nomination for Lili, a movie a small but fervent group of fans adore, while the rest of us scratch our heads in wonder. For that matter, that Caron had a career as anything other than a dancer has had me scratching my head so hard I have no hair left.

Ava Gardner also rode the MGM block voting to a nomination in Africa and a baby elephant in Mogambo (she has the Jean Harlow role from the original movie, Red Dust; Clark Gable has the Clark Gable role…)

Maggie McNamara won a nomination for the once-racy, now overwhelmingly innocent and naive The Moon Is Blue: