If you’ve never looked at Wiley and Bona’s masterly reference work, Inside Oscar, you should. It’s the final word on exactly what occurred each year. Here is how they summed up Mary Pickford winning Best Actress for Coquette: the mystery was “how the Academy could possibly have given Best Actress to Mary Pickford in  a movie which nobody liked.”

The answer is simple: a tea party for the judges at Pickfair. More or less, a command performance, and the command was, “Gimme an Oscar.”

The Academy nominated several others:

Then there’s Bessie Love in The Broadway Melody:

And Corinne Griffith in The Divine Lady:

The very first posthumous nomination came for Jeanne Eagels in The Letter (now more famous as the Bette Davis remake):

The last official nominee was Ruth Chatterton in Madame X: “Ruth Chatterton in Madame X, Corinne Griffith in The Divine Lady, and Bessie Love in The Broadway Melody aren’t worth an Oscar, thus removing them from consideration here. Having to sit through all three of their movies would make a good punishment for any detention hall in high school. Most of them are awkward, stiff, and worst of all, boring, especially when compared to the actresses the Academy didn’t even bother mentioning. Ruth Chatterton would have some other movies that aren’t so painful to watch, but the fallen woman melodrama Madame X isn’t one of them. Posturing, emoting, and faked sobbing on cue isn’t good acting (or good directing). Lucille Ball does a much better drunk on Vitameatavegamin commercials. I wish the Academy didn’t have this weakness for handing actresses the Oscar for endless crying and emotional wailing, but they do. Griffith plays Lady Hamilton, the love of Lord Nelson in England during the Napoleonic Wars (Laurence Olivier and Vivien Leigh would later cover the same story in That Hamilton Woman). Griffith is overacting much of the time, which is not uncommon in the pre-talkie era. Griffith’s performance isn’t as awful as others, but in a film about a great romance where the naval battles outshine the romance, Griffith has clearly not done her job (Marie Dressler is much more fun in the movie as her mother). Bessie Love has some sparkle at times in Broadway Melody, but not enough to overcome the rest of the boredom she inflicts.”

This amazing pair of eyes:

Renee Maria Falconetti never made another movie after The Passion of Joan of Arc, but Lillian Gish did, after proving once more her gifts in The Wind:

And then there’s the first truly great Greta Garbo film, A Woman of Affairs: 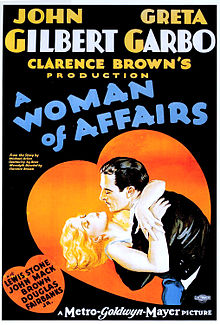 See, Academy? Was it so hard to actually find great performances this year?