As in the previous year, too much cronyism floats over the choice of winners, but the Academy began to jigger the rules (as they would repeatedly over the years) to try and hide that manipulation, as well as making as many powerful people as happy as possible.

Silly people; they should have just been focusing on keeping me — and you — happy! 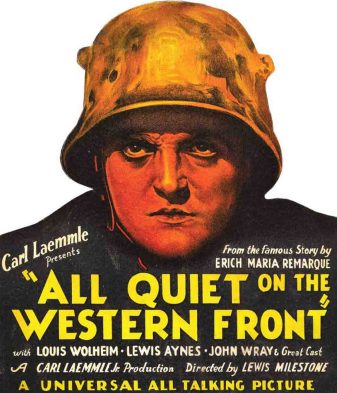 The original winner of the Best Picture was All Quiet on the Western Front, a noble effort at depicting the horrors of war and the virtues of pacifism; the other nominees that year included The Big House, Disraeli, The Divorcee, and The Love Parade.

Here’s what I had to say about these nominees in V. 1: “All Quiet on the Western Front won, but when we compare the film to the other pictures they nominated, it’s not hard to see why, given that few people (outside of film historians) have since bothered watching The Big House, Disraeli, The Divorcee, or The Love Parade. Disraeli is a dinosaur from the nineteenth century theater with sly one-liners, some melodramatic spy-fluff, and lots of “Rule, Britannia” feel (see Best Actor for more); The Divorcee is a dated attempt to display the hypocrisy of the double standard regarding infidelity, even it did launch the pre-Code era of more open sexuality… The Love Parade is…classic Ernst Lubitsch, full of the naughty innuendo and comic touches one expects from this director (see the Director and Actor categories for more), and should be seen far more often, as it belongs on the list of Best Picture nominees.”

Vote for your favorite; feel free to nominate your own!