Don’t get me wrong — “The Last Time I Saw Paris” is a wonderful song, if only it were eligible.

The biggest protest over the Oscars this year came over giving Jerome Kern and Oscar Hammerstein II the Academy Award for a song that had been publicly performed in 1940, and therefore, was clearly not written for Lady Be Good. I suspect that situation has been true more often than the Academy has admitted, but in this case, almost nothing from that movie was original (“You’ll Never Know” – not the famous one – and “Your Words and My Music” by Nacio Herb Brown and Arthur Freed being the exceptions). Lady Be Good stars the tapping feet of Eleanor Powell, the geniality of Robert Young and Ann Sothern, and the clowning of Red Skelton – and more importantly, the music of the Gershwins, Kern and Hammerstein. “The Last Time I Saw Paris” is an act of mourning for the loss of Paris to the Nazi invasion, and probably explains the Oscar more than anything. The song is an excellent one, however, and deserves its nomination, even though it wasn’t written for the film. I would argue the fact that it hadn’t been used in another film or play by that point should allow it to squeak by; after all, how many unused songs do composers keep in their trunks, then pull them out when needed?

Here was the field of original nominees:

Best Song: Jerome Kern and Oscar Hammerstein II’s “The Last Time I Saw Paris” won from Lady Be Good, over Lloyd B. Norlin’s “Out of the Silence” from All-American Co-Ed; Harold Arlen and Johnny Mercer’s “Blues in the Night” from Blues in the Night; Hugh Prince and Ron Rave’s “Boogie Woogie Bugle Boy of Company B” from Buck Privates; Frank Churchill and Ned Washington’s “Baby Mine” from Dumbo; Louis Alter and Frank Loesser’s “Dolores” from Las Vegas Nights; Gene Autry and Fred Ross’s “Be Honest with Me” from Ridin’ on a Rainbow; Harry Warren and Mack Gordon’s “Chattanooga Choo Choo” from Sun Valley Serenade; and Cole Porter’s “Since I Kissed My Baby Goodbye” from You’ll Never Get Rich

In All-American Co-Ed, Frances Langford stars as a young college girl; the boy who falls in love with her is disguised in drag as another student. “Out of the Silence” is a forgettable tune sold big by Langford, with little melody and lyrics that are interchangeable with dozens of other love songs. No nomination was merited for songwriter Lloyd B. Norlin.

“Blues in the Night,” by the profoundly gifted Harold Arlen and Johnny Mercer, gave the title to the Priscilla Lane musical, Blues in the Night. Thankfully, we don’t have to listen to Lane singing the tune (as Gary Giddins pithily said, she “couldn’t swing from a trapeze”). Instead, we get William Gillespie singing it in jail (Gillespie also plays Porgy in the biopic Rhapsody in Blue). Other than the brilliance of the title song, we get a one-shot scene of Jimmy Lunceford’s band (who need to be as well known as Count Basie and Duke Ellington, since they swung as hard as any band ever did). The movie itself is a dark story of gangsters and booze, which probably fit with Hollywood’s idea of the blues (and they aren’t far wrong). Blues in the Night is worth seeing, although awkwardly paced at times, due to being conflicted between the happy go lucky scenes and the melodrama. The title song is an excellent nomination. 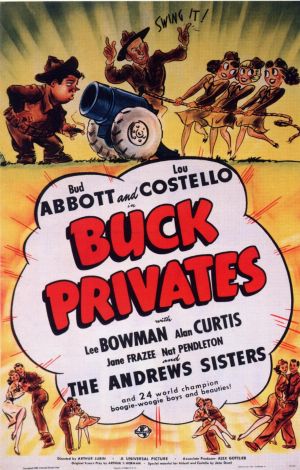 Hugh Prince and Ron Rave produced one of the most memorable WWII songs in “Boogie Woogie Bugle Boy of Company B.” I’ve loved this song since the first time I saw the Andrews Sisters sing it in Buck Privates, starring Abbott and Costello. Infectiously fun, “Bugle Boy” still gets the toes tapping after all this years. The nomination should most definitely stay.

“Baby Mine,” from Dumbo, is a paean to motherly love, and rarely leaves a dry eye in the house. The animation gently shows a series of animal moms and their babies. On an Eighties collection revisioning of Disney music, Stay Awake, Bonnie Raitt delivers a killer version of this song. Whenever a song can be recorded by different artists in artistically rich ways, that song begins to gain traction in the race for permanence. “Baby Mine” is the emotional center of Dumbo, and an excellent nomination. “Pink Elephants” should also have been nominated as the most experimental and adventurous piece of music – and animation – ever released by the Disney Studio.

Louis Alter and Frank Loesser penned “Dolores,” from Las Vegas Nights. “Dolores” is sung by the vaudevillian Bert Wheeler, but became a bigger hit when Tommy Dorsey recorded it with his regular singer, Frank Sinatra. Las Vegas Nights is yet another story about trying to make it big in show business, and stars Constance Moore and Bert Wheeler. Tommy Dorsey appears, with a flash of Sinatra. The song isn’t bad in Sinatra’s handling, but forgettable otherwise – now, if they’d only forgotten to give this song a nomination… Gene Autry and Fred Ross gave us “Be Honest with Me,” from Ridin’ on a Rainbow. I have a great fondness for Autry, growing up as I did with his Christmas album, and as an Angels fan in the Seventies when he owned the team. I had no idea he had scored an Oscar nomination – a big upgrade for a singing cowboy from B-westerns! His song with Fred Ross, “Be Honest with Me,” comes in Ridin’ on a Rainbow, which has Autry going undercover on a showboat to recover his friends’ stolen cattle money. “Be Honest with Me” has a touch of cowboy swing, and the blues that lie at the heart of the best country and western music. Autry puts it across well, and the nomination should stay.

“Chattanooga Choo Choo” is by Harry Warren and Mack Gordon. Glenn Miller and his band play it in Sun Valley Serenade, a celebration of swing, skating and skiing starring Sonja Henie, John Payne, and Milton Berle. The Nicholas Brothers show up in the middle of the song and join in with their acrobatics. A huge hit for Glenn Miller (“Chattanooga Choo-Choo” hit #1 on December 7th, 1941 – and became the first gold record by February, 1942, with 1.2 million in sales.), “Chattanooga Choo Choo” is one of the hallmark songs in the orchestra’s repertoire, and perhaps the most iconic song of the swing era, although not one that inspires any deep response. We just love tapping our toes to it – and that’s more than enough for a solid nomination.

Cole Porter gave us “Since I Kissed My Baby Goodbye,” in You’ll Never Get Rich. Fred Astaire dances with Rita Hayworth, and sings to her. Need I say more? A small handful of composers wrote both music and lyrics; of them, the choice for the best always comes down to either Irving Berlin or Cole Porter. Both men preferred Fred Astaire to introduce their songs, since Astaire sang like he danced, with impeccable rhythm and a respect for the music. As Gary Marmorstein so aptly reminds us about Astaire in Hollywood Rhapsody, “Dancing alone or with a partner, the man was his own master. When singing, however, the greatest screen interpreter of popular songs had the inestimable help of our greatest songwriters.” “Since I Kissed My Baby Goodbye” finds Astaire accompanied by the black group, The Four Tones, who also starred with Herb Jeffries in some black westerns. (Jeffries, who also sang with Duke Ellington, was known as the “Bronze Buckaroo.”). Too bad they never got more famous; they’re quite good. Oddly enough, Astaire not only doesn’t sing the song, he gets out of beat with the performers, all so Hayworth can point it out to him. The Four Tones and Astaire truly go to town with “A-Stairable Rag” later on. While You’ll Never Get Rich may not be top drawer Cole Porter, like Hemingway and Twain, even second-rate output by these masters is better than first-rate stuff from almost anybody else. The nomination for “Since I Kissed My Baby Goodbye” should stay.