For movies released in 1945, the Academy selected Rodgers and Hammerstein’s “It Might As Well Be Spring” from State Fair: as I said in v. 2 of WHO WON?!? An Irreverent Look at the Oscars: 1944-1952, “Rodgers and Hammerstein do their best to bring this hick silliness to life. “It Might As Well Be Spring” has a touching melodic line from Rodgers, with a competent lyric from Hammerstein (who avoids some of his later portentousness). “I’m as restless as a willow in a windstorm” is a good touch, among many.” A pleasant song, and far from the Academy’s worst choices. Here’s the song itself:

The other official nominees were: Jule Styne and Sammy Cahn’s “I Fall in Love Too Easily” from Anchors Aweigh and their “Anywhere” from Tonight and Every Night; James Van Heusen and Johnny Burke’s “Sleighride in July” from Belle of the Yukon and their “Aren’t You Glad You’re You?” from The Bells of St. Mary’s; Jerome Kern and E. Y. (“Yip”) Harburg’s “More and More” from Can’t Help Singing; Walter Kent and Kim Gannon’s “Endlessly” from Earl Carroll Vanities; Harold Arlen and Johnny Mercer’s “Accentuate the Positive” from Here Come the Waves; Victor Young and Eddie Heyman’s “Love Letters” from Love Letters; Ray Heindorf, M.K. Jerome, and Ted Koehler’s “Some Sunday Morning” from San Antonio; Allie Wrubel and Herb Magidson’s “I’ll Buy That Dream” from Sing Your Way Home; Ann Ronell’s “Linda” from The Story of G.I. Joe; Jay Livingston and Ray Evans’ “The Cat and the Canary” from Why Girls Leave Home; and David Rose & Leo Robin’s “So in Love” from Wonder Man.

From Anchors Aweigh, Frank Sinatra sings “I Fall in Love Too Easily,” a largely forgettable ballad by Jule Styne and Sammy Cahn. The lyrics are banal; the melody is the equivalent of tepid mayonnaise. Styne and Cahn were capable of so much more (such as “Time After Time”  and “Saturday Night (Is the Loneliest Night of the Week)”). 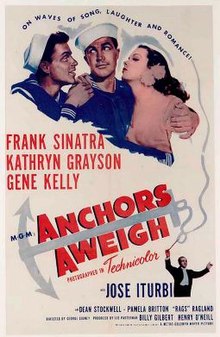 Here’s Sinatra from the movie:

Styne and Cahn did much better with “Anywhere” from Tonight and Every Night. A lovely minor classic, “Anywhere” vows eternal love through a touching melody and fine rhymes. 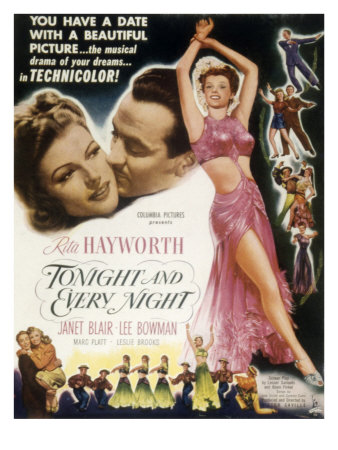 From Belle of the Yukon, “Sleighride in July” fails to meet any level of real interest. A girl sings of being fooled by a boy, like being taken on a sleigh ride in July. James Van Heusen and Johnny Burke could do better (as with “But Beautiful” – try the Johnny Hartman recording).

The same team bombed even worse with “Aren’t You Glad You’re You?” from The Bells of St. Mary’s, which is merely mundane feel-good fluff suitable for a second rate homily:

Bing does what he can with it:

“More and More” comes from Can’t Help Singing, with music by Jerome Kern, and lyrics by E. Y. Harburg. “More and More” is sung by Deanna Durbin. For once, the nominated song is really the best one in the movie. Kern doesn’t quite reach for standard status here, but the melody is calming and romantic; Harburg doesn’t indulge his wicked sense of humor or his gift for intricate lyrics, but the expression of falling in love is done with some feeling.

“Endlessly” from Earl Carroll Vanities fills a spot on this flibbertigibbet of a film. A princess arrives in America incognito, and comes between a nightclub singer and her songwriter boyfriend; the club owner gets involved too. Earl Carroll, who would die in a plane crash soon after the war, was a kind of dirtier Florenz Ziegfeld. “Endlessly” only gets a spot here through the one studio, one nomination rule – and should have been forgotten the minute they wrote the song down in the first place. Walter Kent did so much better, writing “I’ll Be Home for Christmas” and (“There’ll Be Bluebirds Over) The White Cliffs of Dover.” Kim Gannon co-wrote “I’ll Be Home for Christmas” and little else of lasting consequence.

I could find no clip of the song anywhere.

“Accentuate the Positive” comes from Here Come the Waves. I live by the words of “Accentuate the Positive.” Whenever life gets a little rough, I generally slap this tune onto the stereo, and within a minute, things get better (I played it many times in the course of looking at the Academy’s choices…). The melody swings; the lyrics uplift, while avoiding the treacle of easy sentimentalism through humorous touches. Here Come the Waves stars Bing Crosby and Betty Hutton. Crosby’s rendition of “Accentuate the Positive” by the great Harold Arlen and Johnny Mercer, while nowhere near the equal of the one Crosby cut with the Andrews Sisters, will suffice (despite it being in blackface for some ridiculous reason).

Here’s the version with the Andrews Sisters:

“Love Letters“ comes from the movie of the same name. Victor Young and Eddie Heyman had a huge hit with this song. Young’s melody resonates quite well, and provided top sellers for numerous singers, most famously for Elvis Presley in 1966.

In the western San Antonio, Errol Flynn plays a guitar and sings. Perhaps I should stop there. Or not. Flynn doesn’t sing “Some Sunday Morning” – Alexis Smith does. Oh, wait. She pretends to sing, as her voice is dubbed. “Some Sunday Morning” gives a lovely image of a wedding to come someday, with a very gentle longing for the future spouse to show up. Sing Your Way Home stars Jack Haley putting on a show for the troops. “I’ll Buy That Dream” is a very pleasant swing ballad about love and getting married – one which actually rhymes “Cairo“ with “autogyro.”

Here’s the movie version (if you like it, try the Harry James version):

Perhaps the oddest song to be nominated this year is “Linda” from The Story of G.I. Joe, which we first hear when the female Nazi sympathizer sings it over the radio as a way to undercut the soldier’s morale.

Here’s the scene from the movie:

We have no way to judge “The Cat and the Canary” by Jay Livingston and Ray Evans from Why Girls Leave Home — the movie seems to be lost (small production company, no corporate legacy).

The last official nominee is from Wonder Man, which gives us Danny Kaye and Virginia Mayo in their best film. “So in Love” features some fairly involved lyrics in an extended musical number by Vera-Ellen and the Goldwyn Girls. The song drags with the Goldwyn Girls, but overall, the number is about as useful as most tunes from movie musicals of the period. The nomination should stay for David Rose and Leo Robin, if only because the swing picks up as the song goes on, and Vera-Ellen taps the hell out of the number. Danny Kaye’s wife Sylvia Fine should also have been nominated for her brilliant patter songs, which were a perfect match for Kaye’s talents, and remain one reason Kaye is remembered today. A representative choice would be “Opera Number” – wherein Kaye butchers the opera, while conveying the secret to a murder and a large number of laughs. 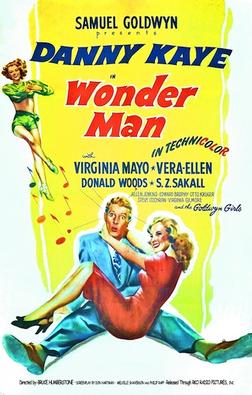 And here is “Opera Number”:

Another omitted song that should have been nominated is “The More I See You” from Billy Rose’s Diamond Horseshoe by Harry Warren and Mack Gordon. The movie stars Dick Haymes and Betty Grable, and as you might guess, is easily forgettable, but the song is a classic which deserves a nomination for the evocation of the intensity of longing and passion when we fall in love. And here’s the final clip: