One doesn’t often think of Esther Williams and Ricardo Montalban and Red Skelton as great singers — because they weren’t — but they brought a classic wintry love song into our permanent memory with “Baby, It’s Cold Outside” from the watery melodrama, Neptune’s Daughter.

Here is part of what I had to say in WHO Won?!? An Irreverent Guide to the Oscars, Book 2: 1944-1952: “Neptune’s Daughter stars Esther Williams as a swimmer who goes into the swimsuit design business; Red Skelton plays a masseur. Williams and Ricardo Montalban sing “Baby, It’s Cold Outside” by Frank Loesser. Skelton then mangles it. The song has had a long life as a Christmas standard, though the lyrics are more about seduction than Santa Claus. The two have been glued to each other for decades. Then again, think of all those babies born in the summer and fall after hearing this song in the winter.”

Many in recent years have chosen to suggest the song is considerably creepier than it is, by noting the questions about what is in her drink and his pleading for her to stay when she thinks she should be going home, but there is little in this song except for innocent denial of her wanting to stay every bit as much as he wants her to stay. We’ve lost that capacity to catch nuances of sexual desire, when that desire had to be couched in far less obvious tones. Yes, the song is meant to be risqué, but the man is certainly not drugging her or committing date rape.

“Baby, It’s Cold Outside” is a classic song about mutual attraction and desire, and not some creepy campaign song for Donald Trump…

Sadly, the movie poster is definitely creepier, given where they’ve got Skelton’s face and his leering eyes:

And then again, so is the clip from the movie, where Montalban indulges in nefarious tactics to get Williams to stay, and not taking no for a no, immediately followed by a role and gender reversal, with Red Skelton in the comic clutches of Betty Garrett (Garrett played much the same role chasing after Frank Sinatra in On the Town):

What do you think?

The defeated songs have had some life to them.

Let’s begin with Alfred Newman and Mack Gordon’s “Through a Long and Sleepless Night” from Come to the Stable, one of the many Catholic love letters Hollywood wrote to appease the Legion of Decency.

“Through a Long and Sleepless Night” was covered by a number of artists, including Dean Martin, Gloria Lynne, and Bobby Darrin, here is the clip from the movie (which does little for the song): 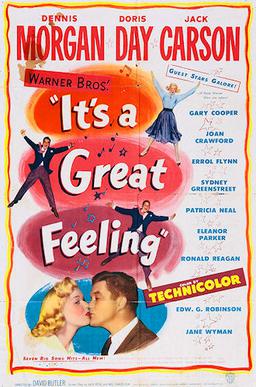 If you’ve never seen It’s a Great Feeling, the movie has a pile of cameos of famous Hollywood personalities, including many directors who rarely made it in front of the camera, as well as some movie stars you may have heard of: Raoul Walsh, King Vidor, Michael Curtiz, Gary Cooper, Errol Flynn, Sydney Greenstreet, Ronald Reagan, Joan Crawford, Danny Kaye, Edward G. Robinson, and Jane Wyman all show up. Here is Doris Day belting out “It’s a Great Feeling”:

Victor Young and Ned Washington’s “My Foolish Heart” from My Foolish Heart, which is a true oddity: the only film ever made of a work by J.D. Salinger, who hated Hollywood so much for this version of “Uncle Wiggly in Connecticut” he refused to sell film rights to any of his works ever again: 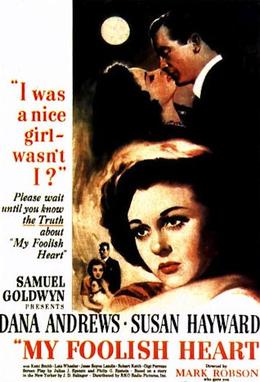 The last official nomination was Eliot Daniel & Larry Morey’s “Lavender Blue” from So Dear to My Heart, which is an odd movie, and an odder nomination, as I relate in my book: ” So Dear to My Heart is a children’s live action film from Walt Disney, about a boy’s love affair with his pet sheep. No, not that kind of love affair, you sick puppy. We are talking about Disney, after all. Burl Ives sings “Lavender Blue,” which is an old folk song, so I fail to see how Eliot Daniel and Larry Morey even got this nomination, since they didn’t write the music or the lyric. Anybody of a certain age recalls “Lavender’s blue, dilly dilly, lavender’s green, // When I am king, dilly, dilly, you shall be queen.// Who told you so, dilly, dilly, who told you so? // ‘Twas my own heart, dilly, dilly, that told me so.” ”

Just to be complete, here is the poster:

And here is the song, which made Burl Ives a mint over the years:

I couldn’t find any worthy omitted songs — can you?