As some of you may know, I am a Disney nut, and I have spent many happy days at Disneyland (I grew up a few miles away). And yes, my snobbier friends make fun of me for this. Their loss. But I do wonder when folks under a certain age ride Splash Mountain: do they have a clue who those characters are, since the source film hasn’t been let out of the vault by Disney for decades?

As I said in v. 2 of WHO WON?!? An Irreverent Look at the Oscars: 1944-1952, “Song of the South can only be described as a problematic film. The movie itself has been kept out of circulation by Disney, and perhaps rightfully so, given the implicit messages of subservient blacks enraptured with their subordinate position. Although set in the south of sharecropping and Reconstruction, the movie still seems to be portraying a world of happy slaves and the joyous love they have for their white slave-owner’s children. Nowhere is this more apparent than in the Uncle Tom figure of James Baskett. Yet Baskett brings dignity to the role, asserts far more authority than one would expect, and generally arranges things to suit himself; Baskett gives a genuinely moving performance. Moreover, the Uncle Remus stories are actually African folktales updated to an American setting, and the figure of Brer Rabbit is a trickster who represents the physically weaker but mentally superior slave, while Brer Fox and Brer Bear are the stronger but dumber slave-owners (these are fairly standard interpretations). The cartoon characters all speak in voices right out of Amos ‘n Andy, rather than Baskett’s authentic tones. Above all that, surprises abound. One is that the movie was shot by the great Gregg Toland, in Technicolor. Another Citizen Kane alum, Perry Ferguson, designed the sets. The mix of live action and animation was done by Disney with his silent Alices, and experimented with in his Latin pictures, Saludos Amigos and The Three Caballeros, along the road to Mary Poppins.”

Here is the infectious title song:

And yes, I will probably be singing that song the rest of the day now…

The other official nominees included Ralph Blane, Hugh Martin and Roger Edens’ “Pass That Peace Pipe” from Good News; Josef Myrow and Mack Gordon’s “You Do” from Mother Wore Tights; Frank Loesser’s “I Wish I Didn’t Love You So” from The Perils of Pauline; and Arthur Schwartz & Leo Robin’s “A Gal in Calico” from The Time, the Place and the Girl.

Good News stars Peter Lawford as a football star who’s failing French, then gets tutored by June Allyson. Love happens – but then, you knew that it would, didn’t you? Mel Tormé shows up to croon. Joan McCracken dances to the nominated song “Pass That Peace Pipe,” which is the sort of Indian patter song that shows up from time to time when everybody thought it was just fine to make fun of Native Americans (other examples would include “What Makes the Red Man Red?” from Peter Pan and “I’m an Indian Too” from Annie Get Your Gun). The tune by Ralph Blane, Hugh Martin and Roger Edens is rhythmic with some intricate lyrics, and McCracken basically steals the whole movie with it. The Muppets also did a helluva version of the song. If it was good enough for Jim Henson, it’s good enough for me. Mother Wore Tights stars Betty Grable and Dan Dailey in a recreation of the early days of vaudeville. In the area of unexpected information, co-star Robert Arthur had this to say about Dan Dailey: “…he was a tortured transvestite. Once, he invited me to his house and there he was, in full female drag. Big, lanky Dan was quite a sight in an evening gown. I was speechless. I didn’t know what to say. ‘You never looked lovelier?’ Dan wasn’t gay; he just liked to dress up in women’s clothes.” (Qtd. in Doug McClelland, Forties Film Talk: Oral Histories of Hollywood, McFarland, 1992, p. 5.) “You Do” from Mother Wore Tights, by Josef Myrow and Mack Gordon, is faked up Gay Nineties schmaltz. Really, almost nobody has recorded this song since this movie came out. 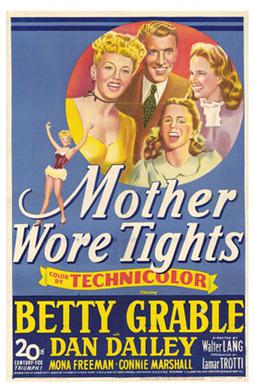 And here’s Dan doing his best with the number:

Betty Hutton escapes from one cliff-hanger after another as the queen of serials in The Perils of Pauline. Frank Loesser’s tune “I Wish I Didn’t Love You So” became a minor classic, covered by both Frank Sinatra and, of all people, Marvin Gaye, who turns it into a major production. I can’t argue with those two – can you?

And here’s Betty Hutton, milking it:

We’ve already seen The Time, the Place and the Girl in more iterations than we can possibly stand: Dennis Morgan and Jack Carson try to put on a show. Along the way, the boys and Martha Vickers sing “A Gal in Calico” by Arthur Schwartz and Leo Robin. The tune has had a lively afterlife, with recordings by Miles Davis, Ahmad Jamal, and Oscar Peterson, among others – but almost exclusively as an instrumental, because the lyrics are banal.

Here is a contemporary version:

Once again, the Academy missed a great choice for the best song of the year by not nominating “Time After Time” by Jule Styne and Sammy Cahn, from the movie It Happened in Brooklyn, starring Frank Sinatra. Sinatra’s recording of “Time After Time” is a classic, as is the song, which speaks of the endless longing for the true beloved, and that ineffable sense of the brimful of joy one feels when love has arrived – and stayed.